About Us » Academy History

In the summer of 1952, St. Christopher Parish acquired the old Shattuck Street Elementary School.  Vacant for 15 years, the facility needed much work, including the replacement of major building systems as well as plenty of cosmetic and finishing work. The work was accomplished by some 40 volunteer parishioners, who came after work each day to clean and paint the rooms and repair and varnish the desks.   When the school opened that September, it had just two grades, first and second, and 64 students.  There were two teachers, Sister M. Francesca and Sister M. Celine of the Sisters of Mercy.


When then pastor Msgr. Quinn died in 1960, his dream of a new St. Christopher Parish School located beside the church was put on hold.  Eventually his successors picked up the project and, on March 2, 1964, the 355-member student body, along with a faculty of six sisters and two lay teachers, left the old Shattuck Street building for their new 16-classroom building on Cushing Avenue.  Over the years, St. Christopher School continued to update and improve its facilities.  A 1996 expansion added a computer lab, a library, and a teachers room, followed by a new playground in 2009, a lobby renovation in 2010, and a Fine Arts Center in 2019.

In 1973, the Catholic schools in Nashua changed their status to a regional school system.  When this plan went into effect, Nashua Catholic Junior High opened its doors to educate seventh and eighth grade students at 72 Vine Street, the former St. Louis Grammar School building.  In the fall of 1976, the school enrollment was expanded to include a ninth grade program, which used the St. Patrick School facility.


In the fall of 1992, Nashua Catholic moved to its present location at 6 Bartlett Avenue, occupying the main building of the former Mount St. Mary High School. In June 2004, Nashua Catholic graduated its last ninth grade class.  The reconfiguration of the Nashua public junior high and high schools made it no longer feasible to maintain a ninth grade and Nashua Catholic remained a seventh and eighth grade school until the Academy opened in 2020.  Over the years, Nashua Catholic continued to enhance its programming in a variety of ways, including the addition of a computer lab, an emphasis on STEAM education, promotion of the fine arts, and expanded athletic opportunities.


Students were educated by religious from the Sisters of Mercy, Sisters of the Holy Cross, Sisters of Notre Dame, Sisters of St. Anne, Brothers of the Sacred Heart, the Order of the Franciscans Secular, as well as many highly qualified lay teachers. 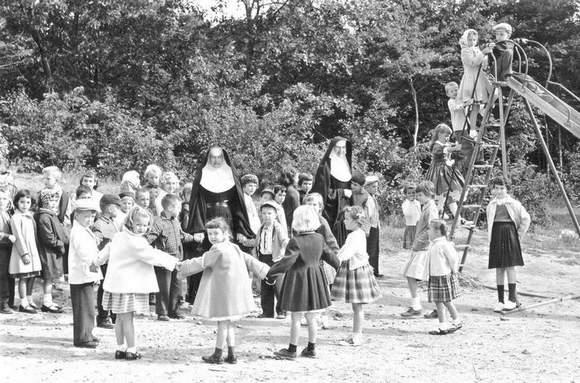